Return of the clots 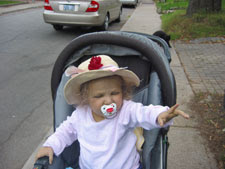 When we got back from the walk her bag was leaking so we out her in the bath and replaced it, she was not charmed at all. But she managed a few smiles. Pam's brother Kenny dropped by and we walked some nice alleys off Wychwood, so peaceful they are. We bumped into Michelle and Pierre and their two gals. Mimi talked to her sweetly for some time but she stared ahead, in her own little world. Mimi is about 7 and old beyond her years. Will she see her sister, she asked me. I don't know sweetie, we'll see, was all I could muster. 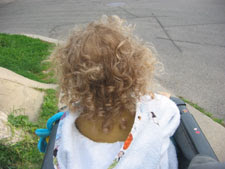 After her bath we went out again a bit later on and she managed a happy grunt when she saw the stroller. This time she lay most of the time, the wind picking up her golden freshly cleaned curls. She looked like an angel asleep. Marcia dropped by and walked out to carry on the stroll however her bag was leaking again so we took her in. The clots keep getting bigger and pushing off the bag. So we replaced it in the bath after her first walk and had to replace it again at 7pm and then patch it again an hour later. Henry dropped by. Reina came over and we made some barbecued salami, steak, sausages and had it with a Greek cucumber salad and roasted fries. All she was interested in was a few bits of a freezie. 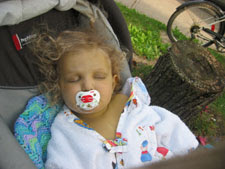