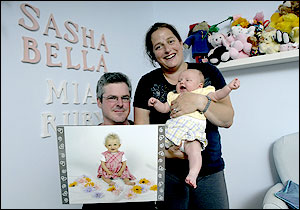 Bubby and Boo in black and white and color 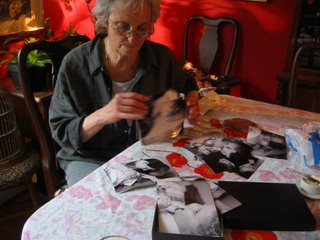 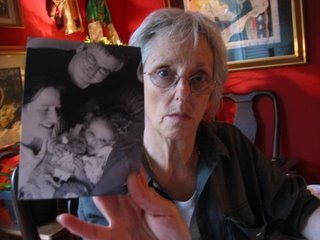 The new memories just stop. It is hard not to want more. I play and replay the time we had. I understand why a person who loses a family would feel pain each time they remember. Memory is bitter and sweet. Very painful at times. So easy to say 'It is always better to be alive'. Imagine losing a whole family to a sudden accident. If I was to multiply our loss by a factor of 2 or 3 and then double it again because when there was no time to say goodbye or because an accident could be avoided, how hard it would be to continue. Sasha was one child. We treasured our time. Still I want more. Still her absence is all around us.

Two months have passed. It took us a long time to visit her grave. It is a small pile of brown earth, there was no marker. We were told a marker would be placed immediately. I placed a crayon on her grave with stones in a small tepee of sticks. Sasha's grave is by the front of the cemetery. Up the hill is Pam's dad's grave, near her is our gentle friend Ruth Koretzsky, near her is Ricky Levine, Sarah's mom, stones on her stone lie nestled with shards of family pottery, close by, in another section, is Alicia Ross, beside her a young boy who died around Sasha's age with a Winnie the Poo on his stone. We looked at the unique gravestones, a campfire and stars for a father who loved the outdoors. Sasha will have a raggedy ann and stars and hearts. We were alone with Marcia, Henry and Sean, so different from when 200 people gathered around on June 25. The cemetery is peaceful, a beautiful spot with lots of trees and sky but I wish it was closer.

We visited 4D on Thursday to introduce Mia. We were welcome, there was lots of love for Mia and us. The ease of being with Mia so contrasts with so many difficult moments with Sasha. We took a basket with two big glass bottles of candy, a baby raggedy and two of Heather's pictures. Alison will ask if the framed picture of us smiling together on our bed can go on the wall beside room 46, Sasha's last room at SickKids. The nurses took turns holding Mia and cooing and I was aware of other parents walking around a happy little group. They hold their hearts in their hands, like we did before. I hope they didn't find our happiness out of place. I remember being in their shoes and appreciating smiles and laughs in the corridors. We passed Dragos as we drove up, he had his baby in a stroller by the bench beside Toronto General Hospital. The cycle of life continues, his first baby, growing through the time we realized we had to say goodbye to Sasha.

Two months have flown by. We feel the aloneness after the crush of people.We have had time to just be with Mia and our memories. Lying awake this morning the image in my head was of Sasha tucked in to bed, raising a hand with a little exclamation Nuuuh, pointing to us to put her blanket by her side. Linda has the CD record of her time in CCU, the many volumes of her other times at HSC still have to be prepared and cost $450. I want the records. Why I am not sure. Sasha toys are all around, I feel great joy when other kids play with them. Some time maybe we will collect them in a nice wooden box, a little time capsule of our peach. Now they are all around. It is hard to write. The blog has helped us get through the last few months and served a purpose as grief and love were shared with family and friends. Pamela doesn't want our lives an open book on the internet while I wish to continue, so we are a little conflicted.

Kids talk about death and remember: "hearts have telescopes"

We've received lots of wonderful stories about Sasha over the last week including this contribution by Matthew, Sasha's cousin, shared by his mom Alisa.

"Okay it was a little eerie that I sat down at the computer thinking of a conversation with Matty in the car this morning about Sasha (the first time since the Shiva that he has asked us about her), opened the blog and saw your message. So, for what it's worth, here's what he said:

Why did Sasha die? I repeated exactly what we told him the first time [added below]and he repeated it part by part (to process it?)
Can we still say her name? Yes
Can we still think about her? Of course
Can we imagine what she is doing? Of course
That's good 'cause we can't really SEE what she's doing...but our hearts can because hearts have things like telescopes to see very far away.

From the mouths of babes (or 3 year olds). Anyway, I liked the idea and wanted to share that there was a big impact even on little ones that rarely connected in person - she is clearly in his thoughts - even on the way home from the mall this am."

Alisa then recounted to us what they told him the first time:

"We were warned not to say that the reason she died was because she was sick - he gets sick, he goes to Sick Kids etc. We had told him on the way to the birthday party that when she was born there were parts inside her bodythat were broken and that the doctors were trying to fix them (he is only concerned with blood and bones in the body right now so he asked if that is what we meant and we left it at a vague 'yeah something like that') and that is why she might have bandages on her arm and not feel much like playing. So after she died we just sat him down and said that the doctors and auntie Pamand uncle Johnny had tried very hard but they couldn't fix what was broken and that her body had stopped working and that she had died. Did he know what that meant. We explained that we would never be able to see her again and that was making everyone very sad. He asked if we could blow her an imaginary hug and kiss goodbye and so we did. We then had to explain that also since he had been asleep Mia had been born. He had a harder time understanding that the two things were not related andI think that he still does. Especially hard for him was the idea that people would be very sad that Sasha was gone and very happy that Mia was here. He couldn't understand how you could feel more than one emotion at the sametime. We knew that he got it because he apparently told teachers and kids at daycare that day about both things. We tried to revisit it later in the week to check if there were any questions, we had gotten him a book about death, but he wasn't interested - in his case just a short conversation seems to have been all the explanation he wanted."

Thanks Matthew for showing us how you see and empathize. 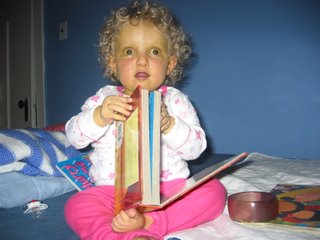