Missing Sasha on the last day of Shiva 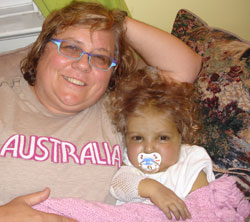 We were visited in the morning by Judith Librach with her little daughter Jessie along with Meredith and little Sarah. Judith's Dad Dr Larry Librach is the director of palliative care at Mt Sinai and when Pamela was ready to explore palliative care she first spoke to Judith. Moments when little girls crowd around Mia and speak to the cat are moments of normality, temporary respites from feeling Sasha's absence. In the afternoon Fran and Allan visited and we drifted into talk about the music we loved. Later Judith's husband Ryan Peck visited with little Ella, a nice bookend to the day. Ryan is a lawyer who works for Legal Aid, my kind of guy, and we see eye to eye on many things as the conversation turned to jewish education for kids and the recent ugliness in Israel and Palestine. Sarah Laiah and Steve Petroff also visited and that was a special connection to the group I befriended at Temple Emanu-El confirmation class in 1981-2 just after I arrived from South Africa. We ran through where everyone was - Sarah wants to plan a 25th anniversary of our trip to Israel, something to look forward to next summer.

Tonight was the last day of shiva and it weighed heavily. Each night I have conjured up Sasha in my mind during the service and they have been emotional. But tonight it was painful. Each day has been different in regard to how much I missed her, perhaps on some days I was just more distracted than on others. I felt at times like a tour guide, standing at the bottom of the steps, This way to see Mia, This way to shiva service. Tonight I wanted to be alone after the service and went to sit in the backyard. Later Raina joined me and said she thinks of her father Bruce every day and that she can hear Sasha's voice. After everyone left, we came upstairs. Pam was crying and watched some videos of Sasha starting to walk, the night before surgery. I had to walk away and get some biltong from downstairs. A bit later while Mia fed, we spoke about some plans and that was what I needed. I guess there is a fine line between remembering to the point of heartache and sinking into a depression and surely some of it must relate to how we spend our time and how alone we are. Pam and I seem to balance together and stay away from the rocks. When I told her Raina hears Sasha's voice she says she remembers the first visit after surgery before Sasha was reintubated and she HI, with a deep grating rasp. Sometimes I am thankful I do not have Pamela's memory and my reminders are the happy videos.

I love this picture of Lynn and Sasha, they seem so cozy together and Sasha looks older than she does in the other pictures around this time. What an intense soul.
on Thursday, June 29, 2006