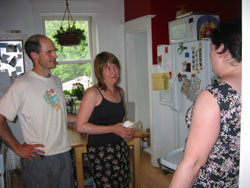 Sasha was giddy with good feeling Friday morning after two days of steady fresh bleeding. Rich and Marianne drove in from Montreal to hangout for a few hours and give us some of their lovely strength and humour; at times as we were speaking about Sash it just felt so heavy, no avoiding the obvious. And Sasha met Marianne's pump, fascinated as her and Pam caught up in the kitchen and she pumped away. With lunch out back and a beer, they were back on the road to miss the gridlock. Amazing!

Sasha then walked Sammy and me to the park with the cool wind blowing her hair and some smiles as Sammy jumped for the ball in his usual athletic manner. Then back to a nap, check in with the business, a quick IV top of of saline as she looks dry, followed by a walk with Granny and Gramps who now come ready, Mom kitted out in walking wear, Dad throwing off his jacket, rolling up his sleeves and muscling down the little front yard hill with the pram. No blood from noon until nighttime, then as we were getting our hopes up, it starts again.

To bed and lying beside her trying to keep her hands from scratching around her bag, where the skin is cracked and dry and she cuts herself, or worse, just ripping it off. She awoke as usual a few times and then around 11.30 wanted to hangout so in came Mom and then a good sleep until 8am, crabby and upset, her bag full of fresh blood again.

So off we went shopping, with a fresh rose in her hat band, getting iced chocolate chiller for Pammy and eggbread, potatoes, icecream, all kinds of beans for a salad and some pickled tomatoes for fun. But rather than making a big breakfast we had some eggbread and then as she actually cried out in her high seat I took her again for a stroll, when who did we see but Oscar and Doug preparing for a splish splash. Sasha sat without a peep and stared as 1 year old Beck held the hose and sprayed everyone, Doug set the hose to mist so Oscar could mist Sasha, and they all got wet and wild. Then Malou caught up and took Sasha further. I wonder what people feel when they ask how she is, that she looks Great! and I just say matter of factly, She's comfortable, wowee it was good to see the splish splash and looks like we have a couple more days together. That's right. I cant put it on her to give us any more surprises, its not fair.

Its been 4 weeks exactly since Sash Bedash came home and just less than a year since she first vomited large amounts of blood due to her portal hypertension, diagnosed at the time as a nose bleed gone awry.
on Saturday, June 17, 2006