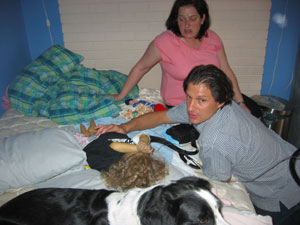 We started Saturday with a visit from Sasha's pediatrician, Dr Michael Peer, who thinks the clear vomit may be produced by all the coughing, and the cough may be from a bug she picked up. Sasha loves Dr Peer, she always has big eyes for him, and we love him because he is so positive.

When science doesnt provide a clear answer, such as why the bleeding stopped, we appreciate simple thoughts like: Sasha really wanted to go home, good for her! The good doctor splits his time between private practise at Bathurst and St. Clair, U of T's Department of Pediatrics and his paediatric clinical education work at Sick Kids so we bumped into each other while away from home and he joined us in the lobby on the day of our departure. Dr Peer's partner Karen is a nurse in CCU and 4 so we would also see her 'around'.

It was a lovely day and I walked barefoot over to neighbours who were adding plants while little James played, and we were joined by Liam from across the street, both are within a month or two of Sasha's age. She just looked around intensely, too early for smiles. Later we went for a walk, dropped in on an open house, bought a poppy and, after I wished Dvora and her kids Gut Shabes, were invited back to the Chabad Midtown garden, where Sasha spewed all over me while sitting on the climbing fort. Dvora didnt blink an eye. Walking home, we talked about Sasha's Hebrew name Shifra, which we remembered to mean Strength (um, actually it means Beauty). Both are true of our little girl.

That night mom, dad and Sean stayed for a barbeque and Kenny, Cindy and Lynn visited and hung out until Sasha went to bed. It took awhile for her to fall asleep and she woke up often during the night.
on Sunday, May 28, 2006